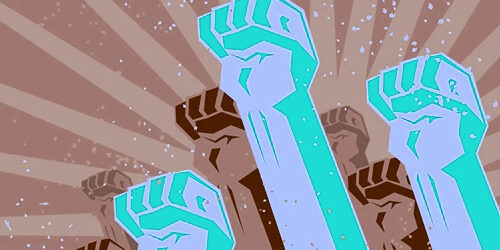 Before we dive into what sent the Ropsten test merge off course, its relevant for that purpose to consider what Ethereum means on a broader level and why people have been drawn to it.

VBs recollection of being pissed off when Blizzard removed damage from his favourite spell without considering his childhood dreams resonates with many Ethereum believers in one way or another, we’ve all lost something that was important to us without consultation.

When engaging with the Ethereum community newcomers are welcomed with an outward projection of libertarianism. Ethereum fanatics suggest that the community offers a place free from the establishment and authoritarianism where technology rules. This messaging is undeniably backed by the community, it is a disruptive technology with a hint of anarchy.

The concept is immediately endearing to those with even a modest interest in tech and/or the class struggle.

DeFi is rooted in this sentiment. Hailed as the silver bullet to finance overlords, those who participate champion Ethereum’s ability to ‘bank the unbanked’ and provide worldwide economic freedom to all in a trustless environment.

This theme continues to expand and include the communities interest in social justice with an appetite for ‘public goods’ penetrating the community, “we can do the public good, but better” is the swagger narrative.

Central to much of the success of Ethereum and more generally the decentralised movement is its sense of community.

But WTF does this have to do with Ropsten?

Given these outward virtues why then does there appear to be such widespread discontent within the Ethereum community that went so unnoticed that when the Ropsten test merge was taken off course it seemed to take the Ethereum Foundation, Ethereum client teams and those participating in developer calls almost entirely by surprise.

Firstly, we wont go into what happened deeply as that’s been widely discussed. Basically someone identified that the Ropsten test merge was extremely vulnerable to being manipulated because testnets inevitably have very low hash rates. So they added a considerable amount of hash rate and sped up the timeframe to the merge 20x and caught people off guard.

The TTD planned to be used for the Merge is a fixed value and therefore is very susceptible to hash rate movements and that’s a fairly significant issue on its own.

Now, what this has done is exacerbate the divide between Ethereum developers and the community that has supported them for years leading up to the merge (the security guarantee providers), the miners.

EIP1559 caused some friction and to be fair some proposals from some miners weren’t the most constructive and just fostered a divergence of two factions, but regardless, what happened with Ropsten and the ensuing response is not an example of a well functioning community that places value in its social consciousness.

The developer/miner relationship is increasingly starting to represent an example of issues that lead to unionism, where miners are very clearly looking like the early forms of a disgruntled, disrespected community of participants.

What happened to disrupt the Ropsten merge event has been argued as a mere inconvenience where someone spent a few hundred dollars to essentially be a nuisance to the community.

This would seem a little naïve as the issue likely runs much deeper than that.

Firstly the 6Ghs or so that appears to have been added to the network might have consisted of something like 100 x 3070 gpus, double that number if older generation AMD cards or a significant number of ASICs.

This is not someone merely being a trivial nuisance. Diverting ANY return on that investment is not done on a whim.

This does not consider the effort someone (or a team) has put in to acquire the cards, manage the heat, power and accommodation requirements (noise) not to mention the thought that would have gone into other components.

Sure its possible someone might have hired that hash rate for a few days, but syncing a Ropsten node to merely be a nuisance isnt something we suspect Nicehash et al are used to and would’ve raised a few eyebrows.

Either way the reality is the infrastructure had to exist for them to do that.

So what we are left with is an intentional act to disrupt the planned Ropsten test merge, but why?

Defiant behaviour often masks an underlying issue and defiance seems to be what the Ropsten disruption was rooted in.

FTM – For The Miners

Joining the mining community is a way for anyone to join the movement with relative ease. Sure it meant hour upon hour researching, tinkering and fiddling, much to many partners annoyance but it meant something to be part of Ethereum.

Miners have onboarded thousands to the Ethereum ecosystem, whether it be friends, family or colleagues, its hard not to be a little interested in what they are doing with these noisy glowing heaters that seem to do bugger all but cost a fortune and take up hour upon hour.

Communities have grown, friendships built and likely millions of hours have gone into building Ethereum’s PoW security model into an industry leader. The mammoth amounts invested by tens of thousands of home miners can be reflected in the NVIDIA and AMD stock prices to support a decentralised Ethereum. Yes of course for a financial incentive but it is not without its own risks and to many it meant much more than that.

For some context for the uninitiated, there are hundreds of millions (maybe billions) of views of Ethereum mining videos on Youtube with hundreds of thousands of comments.  The youtube following rivals Paris Hilton when she was making her first videos.

To date the messaging from Ethereum developers is devoid of understanding or compassion for the mining community and it devalues their efforts to such a degree it is very clearly creating resentment. This is very clear to see from any mining forum, discord, telegram, and even the ACD calls where the chat is littered with miners.

This is not good for the community and is not a good sign for Ethereum.

Work towards the merge will carry on and Ethereum will continue to evolve.

Perhaps that evolution might include something that mirrors its ‘public goods’ ambitions with an initiative that investigates how it might support a significant part of its own community facing a terminal event.

Delaying the Merge is not a suggestion and is foolish for anyone to suggest it, but there are many ways to demonstrate the communities gratitude.

Miners are a significant and integral part of Ethereum’s evolution and deserve a bit better.

Taking something away that people come to love with no care or thought can have far reaching impacts.

“I happily played World of Warcraft during 2007-2010, but one day Blizzard removed the damage component from my beloved warlock’s Siphon Life spell, I cried myself to sleep, and on that day I realized what horrors centralized services can bring. I soon decided to quit.”