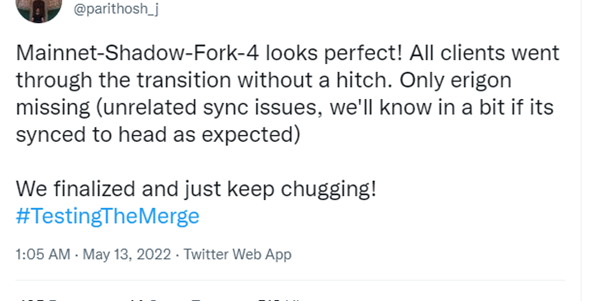 With Shadow Fork 4 being confirmed as a resounding success, eyes were on All Core Developer Meeting 138 to announce the next public test network to be put through The Merge.

The degree of public interest is becoming increasingly apparent by the number of watchers attending the public calls. Call 138 already has 2.7k views in just 11 hours, with it shaping up to be the most watched call on record.

Rapidly growing interest is understandable given on-chain data suggesting hundreds of thousands if not millions of active Ethereum users across L1, L2, side chains, ERC20, and ERC721.

Not to mention some estimates conservatively putting miners as having 15 million plus GPU’s deployed, excluding ASICs, and a massive following of over 1.3m on r/ethereum.

Ropsten was confirmed, with Marius Van Der Wijden sharing the Terminal Total Difficulty value at which the merge will be triggered.

During the call there was some discussion around the timing of the event before settling on a figure. Two dates were in contention, either on 8th June or 15th June. A critical factor influencing the discussion was the ever present difficulty bomb. The bomb seemed to sway the discussion towards an earlier forecasted TTD and 8th June was settled on. This gave more time to implement a delay to the bomb should issues be identified when merging Ropsten.

There was a brief discussion around what test network would be merged after Ropsten, Marius suggested that Sepolia might be a better candidate to merge before Goerli however no outcome was confirmed and its likely to be brought up at the next ACD meeting.

Given the complexity and significance of the merge it seems that testing patterns of previous updates, where there was a one week period between testnets, will not be followed.

Looking at current progress it seems that at least one All Core Developer meeting will happen between each of Ropsten, Goerli and Sepolia.

With no announcement or signs of urgency about the impacts of the difficulty bomb it is relevant to take a look at how the network is likely to be impacted with delayed block times.

To estimate what block times will look like leading up to the merge without a delay to the difficulty bomb its useful to hypothesize a timeline.

The below is purely HYPOTHETICAL to give us something to work with to look at how the network will be impacted if block times start to be slowed before mainnet TTD is reached.

We have assumed a two week break between public testnets to allow for one ACD meeting.

Using August 17th as a target we can take a look at block times and mining rewards.

We can see that daily gas use is correlated with block count and rewards. As block time slows, miners can expect proportionately less reward in ETH per period of time. Using the most recent significant delayed block time example in late 2019 we can see the impact on mining rewards.

Using this we can estimate that there may be roughly a 10% reduction in block rewards by August with increasing reductions in September and October.

Less blocks should correlate to more competition over block space impacting average gas prices, however we are yet to see that.

NFT operators should take note of the spike in gas prices on 1 May resulting from the Yuga Labs land sale. Any large scale NFT mints in a period where there are delayed block times should be carefully thought through as it is likely to have an even more catastrophic effect on gas prices.

It could be argued that the Yuga Labs release was at a time when the early stages of the difficulty bomb were being felt and very slightly delayed block times would have an impact albeit small.

Total blocks produced are clearly declining, not significantly enough to noticeably impact rewards or supply, however they are declining.

Despite the market turmoil ETH continues to be joining the staking contract in large volumes, with around 0.5% of total supply in the current queue.

Recent events have should serve as a great reminder that sensible approaches with extensive testing are the only approach. A huge thanks to everyone working on making the merge a safe event for all current and future stakeholders.

VS blockchains that don’t plan effectively

The merge is happening.